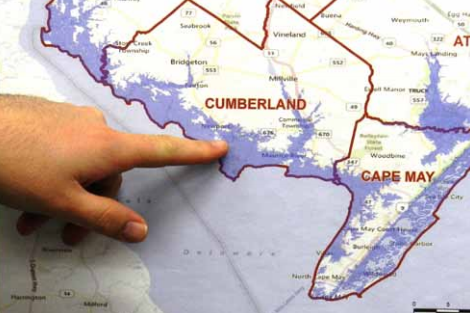 Money Island is in rural Cumberland County, New Jersey on the southwest tip of the state with the Post Office of Newport NJ 08345. We are the smallest community in Downe Township, promoted as “the nature lover’s paradise”, on the Delaware Bay shore. The community consists of two roads, Nantuxent Drive and Bayview Avenue with an additional unpaved spur officially known as East Nantuxent but locally referred to as “shell lane”. The marina bait house is the first building visible as you approach the island from the causeway.

The marina is located on Nantuxent Cove, where the Nantuxent Creek enters the middle Delaware Bay. We are about 60 miles directly south of  Philadelphia via Route 55 and about 16 miles southwest of Millville New Jersey. We are 8 nautical miles east of Dover Delaware. Get driving directions from Google Maps.

*Please be aware that there is another place nicknamed “Money Island” in New Jersey (not ours) near Toms River on the Atlantic Ocean side of the state. There is also another places nicknamed “Newport New Jersey”. The other Newport NJ (not ours) is a recently redeveloped multiple use community near New York City. Avoid confusion by entering the zip code “08345” into searches.