The Delaware Bay remains empty. The State of New Jersey is hard hit by the coronavirus with the second highest number of cases of all states in the nation. Here in South Jersey, the rate of spread, measured in the number of infections and deaths, has not yet peaked. Our fishing and related industries are especially hard hit. With restaurants closed, the commercial markets for fish are closed. Marinas lost most of their 2020 rentals. Recreational fishing and party boats have been shut down. Here at Money Island, the effect is amplified. Money Island is the state’s second most productive seafood landing port and the bay’s primary oyster landing port. Yet in 2020, landings are minuscule compared to other years. Most of our commercial boats are not operating. The crab shedding operation is closed. Some local businesses have already announced publicly that they are unable to reopen this season. Others are suffering silently.

The CARES Act allocated $300 million for the commercial fisheries industry. Some of my clients hope to recoup partial losses from this money. Yet more than a month after the law was passed, no funds have been distributed. The proposal that NOAA offered is unfair to New Jersey in that it is based solely on dollar value of the fishing industry last year and does not consider the impact of the virus had on the industry’s losses. Losses are clearly worse in New Jersey than in other seaboard states.

A number of industry groups and all New Jersey’s federal legislators are lobbying for us. A representative from Jeff Van Drew’s office called me Sunday. Yet I fell like I’ve been down this path before: seven years ago after super storm Sandy. After many months and years of intense work, no financial assistance was provided for recovery. Again this year, just like in the past, it is not the natural event but government’s reaction that is causing the financial pain.

The Money Island Marina is still in significant debt from Sandy losses. We missed a final scheduled tax debt repayment on April 1 because of the industry shut down. The prospects of reopening and sustaining any of the businesses here seems remote at this point.

We must keep trying, but there are no solutions on the immediate horizon.

White perch are the most popular fishing target and the only species of local fish that can be caught year round – even through the ice. White perch are native to the Atlantic Coast and can adapt to fresh or salt water. espite the name, white perch aren’t actually perch. They are members of the temperate bass family, just like the striped bass. They prefer low-salinity estuaries but frequently inhabit coastal rivers and lakes.

In summer months shrimp or blood worms are the best bait. In winter small minnows work best. The best fishing spots are along the grassy banks of the creek. The meat is incredibly tasty. They can be grilled whole or cut into fillets. We now have large 4 gallon buckets of frozen bunker chum available for $25. It is always best to call in advance and we suggest allowing time for thawing. We use the chum by drilling large holes in the the bucket and hanging it overboard. Other prever to shovel it out after thawing. 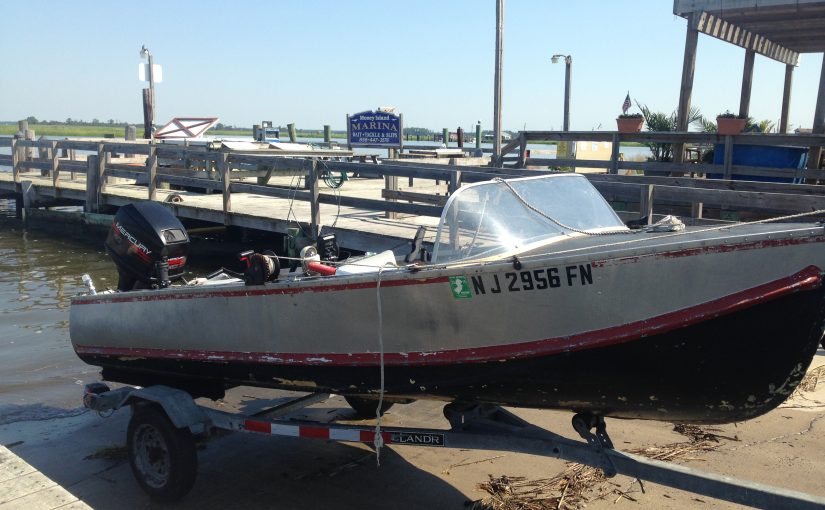 2018 UPDATE: This offer is replaced; the blog post is obsolete. For 2018 the ramp fee is waived for all boats. Marina membership is required to use the ramp or any marina facility. Annual family membership is $50.

We are testing a new marketing promotion as the flounder season gets started this year that is intended to introduce more boaters to the convenience and level of service available here at Money Island.

Normally the ramp fee is $15 for boats up to 18 feet and $20 for larger boats that typically require assistance with the launch and loading.

We advise against using the boat ramp within 90 minutes of low tide. Low tide time is available using the link at the lower left of this page or by calling the marina at 856-723-0294.

This offer is valid for first time use of Money Island Marina boat ramp and is available at the discretion of the marina manager. One offer per customer. Minimum purchase $10 bait

Live/fresh bait is always subject to availability so call ahead 856-723-0294. Gratuity is not included.

This offer ends on 8/20/2016 or when the ending date is changed on this web page. Please send comments/complaints/feedback about this promotional offer to Tony Novak at cell/text 856-723-0294.

This little 2.5 horsepower 4 stroke engine is one of the most fuel efficient outboard engines made. It does not set any speed records but easily moves our 12 foot aluminum rental boat up the creek for perch fishing.

We thought that the sound of an outboard engine would be welcome and comforting in the middle of January.