This past weekend’s storm caused more problems here than we initially expected. It is quite noticeable that Money Island took one more hit in the long battle against rising water level and increased storm energy. The most visible impact is a loss of more than one vertical foot of beach sand on the water side of the new Bayview Road bulkhead.  That beach loss was a predicted impact of the sea wall construction but seeing it happen in real life is no less shocking. The marina lost a finger dock

, a load of dock lumber and of our two dock ramps need major repairs. One neighbor’s house lost a section of siding. At least two of the commercial docks need repair or replacement of their flotation. Repair costs of the damaged items we noticed are likely to be in the range of $10,000 to $20,000 even with our use of primarily volunteer and uncompensated labor.

One of the long term predictions about the effect of climate change is that the combine forces of sea level rise and increased water and air temperatures in that smaller storms like this will have a greater destructive impact on property. That seems to be the case with this recent storm Jonas.

I noticed the irony that the newer structures seemed to incur the most damage. The old decrepit and abandoned structures here seem to have survived unscathed. We do not yet know what is caused this new dock to sink. Perhaps the air-filled floats cracked and filled with water. The floats were rebuilt in September 2015. This will likely be our most difficult and expensive repair this spring.

Flowing sand across roadways and parking areas can cause headaches.

There is more deterioration of the roadway at the Bayview Road bridge yet a tractor clearing debris drove over it today.

The snow and ice on the marsh was mostly melted by the end of the day Monday.

We figure that eventually U.S. manufacturers of amphibious vehicles will bring the price down, but you can forget about troubles with flooded roads right now for only $155,000. We definitely see a vehicle like this in the future of Money Island residents of the year 2030. Over the past 3+ years since hurricane Sandy we’re made huge progress toward improving our ability to withstand high winds, flooding and even flowing ice. You could say it’s almost been an obsession around here. Here is a partial list of our recent projects:

Storm protection is an ongoing project for us but we feel confident that we’ve come a long way in the past three years.

This little 2.5 horsepower 4 stroke engine is one of the most fuel efficient outboard engines made. It does not set any speed records but easily moves our 12 foot aluminum rental boat up the creek for perch fishing.

We thought that the sound of an outboard engine would be welcome and comforting in the middle of January.

The wind this week caused some damage but overall we are still doing much better this winter than in past years. On days when the wind dies down we still get some work done at the marina. At this point in mid-January we are beginning to gain hope that we will get through the winter without any major replacements necessary.

This photo below shows ice damage from last year’s severe winter. We replaced 7 of these damaged finger docks with a stronger design and have 2 more under construction now. 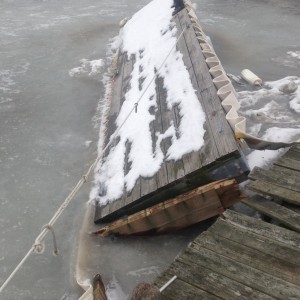 Despite the cold weather now

, it won’t be long before reservations for our docks start heating up. Spring striper season beginning in March has been fairly successful for the the few boater who venture out in search of the migrating fish.

It never gets old. We just resolved the boat slip questions for 2016: 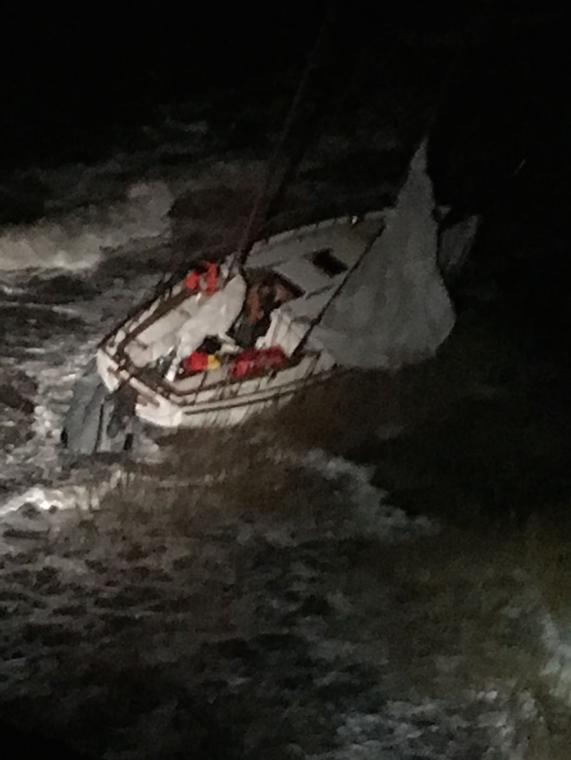 “The Coast Guard recommends mariners to carry a working VHF radio, life jackets and signaling devices prior to beginning their voyage. VHF radios have a greater range than cell phones, and provide a direct link to Coast Guard watchstanders.”

Congratulations to Tom and Samantha and their families on the birth of Thomas Todd Pew III, born 11:55 pm last night, 7 pounds even according to his grandmother. Young Tom may be Money Island’s first 3rd generation waterman.

We expect full moon flooding on the roadways this morning 1/10/2016 and for the next few days. High tide is about 9:30. Use the tide lookup tool to check tide times and water level predictions. The roadway may be impassable for an hour or two before and after high tide.